Article written by Regina from The Conscious Media network 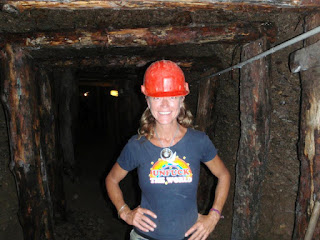 lissynote~ here's me in the Ravne underground tunnels in July, after seeing for myself I can tell you this is a VERY MYSTERIOUS and LUSH placeew

Comments (0)
September 8, 2012
I’m up above the clouds again, the red tiled rooftops of Sarajevo disappearing behind me. As happens above the clouds, my mind is wandering back to the past few days in Bosnia.
Our taxi driver, Caki, became a friend in the half hour we spent together. His family has been in Sarajevo for 300 years and he has no desire to go elsewhere, in spite of the pain of the past two decades. Scott and I couldn’t help asking about the 1991-95 war with the Serbs and what life was like then.
Caki asked to see my left hand and explained that my gold and sapphire wedding ring would have bought a meager liter of cooking oil. Coffee was 70 Euros a kilo; fuel, 9 Euros a liter. The conflict disabled his profession for the duration.
We also noticed the scars on his arms from his wrists to his shoulders; horizontal stripes of scar tissue from slashes with a drunk Serbian soldier’s bayonet. I didn’t ask what was under his shirt. He explained that he was one of the fortunate ones. As a prisoner of war, he one of the lucky ones to be exchanged for two Serb prisoners. Today, he is alive with a wife and children.
When we asked if the people had a sense of hope once again, with the war more than 15 years behind them, he quietly said “No.” He then quickly changed the subject. He shared his daydream of having a little piece of land, with a small river running through it where he could care for 50 dogs. His love for canines is evident in the contents of his trunk where he carries dog bowls for both food and water, plus jugs of fresh water. Though he only has two dogs in his home, he cares for another 18 of the thousands of homeless dogs in Sarajevo.
Earlier in the morning, we visited the home of Dr. Samir Osmanagich, the man who discovered the famed Bosnian Pyramid. His home looks over the hilly Sarajevo, a disproportionately large part of which featured cemeteries. He too explained of the hardships of having lost 200,000 people out of a population of 4-million. Yet, he believes there is hope in the form of his astounding discovery.
Millions of tourists pour into Egypt each year to experience the pyramids, which is natural as the pyramids are spectacular and easily visible. The even larger and reportedly more precisely oriented Pyramid of the Sun, located 30 kilometers outside Sarajevo, is covered by soil and trees, but nonetheless imposing in it presence as you approach it.
As an archeologist, with his Ph.D. in Mayan culture, Samir knows the characteristics of pyramids. He’d studied dozens of them throughout Mexico, as well as Central and South America. Where there are pyramids he knows there are tunnels. It was clear to him that this massive structure was no mountain, therefore there must be tunnels. So he began digging.
Today, not only have he and his volunteers emptied 900 meters of strangely filled tunnels, they have uncovered building blocks and underground chambers dotted with megalithic carved, smooth stones. Still, the majority of scholars claim from afar that the pyramid is a hoax.
Samir, meanwhile, moves forward, armed with 65 volunteers, shovels, hard hats and wheel barrows. But something startling has happened that may change the future of his Bosnia.
While digging, a piece of organic material — petrified wood — was found between the soil and the pyramid concrete blocks. An Austrian film crew was there to witness the discovery. The material was sent to independent laboratories in both Poland and Kiev. As of 12 days ago, the first results were in. The petrified wood sample was dated at 24,600 years old. Yes, nearly 25,000 years ago some highly intelligent species built a structure that emits unearthly levels of energy and negative ions, like none found in nature. Who did it and why? That’s the rest of the story yet to be discovered.   read on...
Posted by liss at 12:19 PM